All around Hilary and Rod, friends seemed to disappear, acquaintances were non-existent, and the TV had become Rod’s constant companion. After 46 years of marriage, their children were all that was left that connected them to the word outside, a world they had all but forgotten. One by one, the isolation robbed them of their friends, until they no longer sought out the many things that made up their once busy and rewarding lives. Then, the depression took hold.

It wasn’t until Rod suffered a damaging fall and a heart attack in 2009 that things got really bad for the couple.

“It’s very easy, as health and financial constraints impinge on a once active lifestyle, to let isolation creep up on you. It becomes easier to stay at home, saying no to friends, until they cease to ask you out”, says Rod.  Reflectively, Hilary agrees, describing this time as their lowest ebb.

The situation had reached crisis point for the once active pair. Was it time to open the door to the outside world, take a step, take a risk, and see what was really out there?

Care Connect was by their side for those first intrepid steps in 2011.

“I was at a very low ebb in my life when Care Connect’s Client Adviser came to see me”, says Rod.

Rod’s Client Adviser talked through the issues both Rod and Hilary were facing and they worked together to put some strategies in place to improve their situation. Care Connect’s independent advice and support were critical to them both becoming more active and engaged in the community.

With a Care Plan that included much needed independent advice, and home care services, to really plan ahead, they looked forward to achieving their goals of continuing independence and safety in their home.

“From that point on, our quality of life improved and we became more active and engaged. Just knowing that someone, besides our own family, cared so much, made a difference, and it basically was the turning point for changing our lives”, says Hilary.

Care Connect helped them to stay in their own home, and be independent. Rod is now enjoying some newly learned IT skills (he hadn’t used a computer for 15 years). This helped his self-esteem, and improved his quality of life. He’s been able to reconnect with past hobbies, including photography.  He also feels more informed, through his connection to the world through the Internet, and he loves having more to talk about with people the couple meet.   He also uses email regularly to connect with his many new friends.

“Rod and I are now involved not just with family, but with lots of people in our community. We’ve made new friends and new connections, and we’re now leading a full and rewarding life. Care Connect’s Client Adviser’s advice and support has been critical to our achieving this transformation. We have gained an improved quality of life, greater connectedness to the community and improved self-esteem”, enthused Hilary.

The pair have now become very familiar faces in their community, as valued volunteers. Rod got involved with a local Men’s Shed and also became an advocate for the disabled and ageing in the local community, making a difference to the lives of others, while enhancing his own.

“Our expertise in a past life was in marketing and organisation and we’ve been able to contribute to several organisations with these skills. Rod actually helped the Men’s Shed in Monbulk get established. We both became committee members for the steering committee.”

With Christmas coming up, they will certainly be very busy.

“We’ve helped with the Monbulk Community Carols over the last four years, and we’re both still involved in the organisation, this will be the fifth year.

“It was as a direct result of encouragement from Rod’s Client Adviser that led to our getting out in the community and volunteering our skills for a variety of organisations, including involvement with the Consumer Voice Committee of Care Connect. We hope others can gain similarly from the experience”. 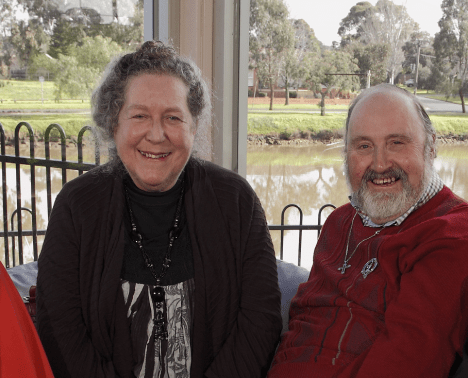