June goes back to pre-school

June goes back to school

It’s been a few decades since June Hawkes was last in a room filled with children, however that’s precisely what Sue, her Client Adviser, was able to arrange at the request of her husband Tom. 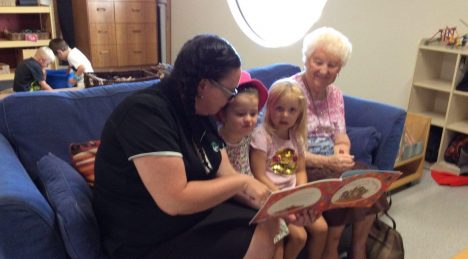 June has advanced dementia, and Tom noticed that whenever children were on TV or June saw them in the shopping centre that her eyes would light up and it would bring a smile to her face. Tom asked Sue if Care Connect could arrange a suitable place for June to have more interaction with children as her grandchildren were not close by. After approaching a few child care centres without luck, Sue eventually had a positive response from Cooloon Children’s Centre and went to meet with their manager. This resulted in a four week trial to see how June would go as part of the volunteering or visitor scheme. There were a few hiccups along the way, but Sue and Tom persisted with the plan, and eventually June had her day with the children. Accompanying June on these visits is her organised care giver, Jacinta, with whom she has a very good relationship. The trial has been so successful that June is now a regular visitor to the children’s centre, and is quite chatty with the children.

Tom says “June really enjoys going to the children’s centre – she really loves it. It makes a difference to June’s behaviour on the day she attends the centre – she is happier and calmer”. Tom is really happy that he received the help to make his plan for June to interact with children come to fruition, and believes the more people know about the positive effects, the better.

Thanks to the care of a persistent Client Adviser, a trusted relationship with a care giver, and Cooloon Children’s Centre, Care Connect is able to build these valuable experiences which make a difference.