Staff Story – The Need For Speed

Still riding on an all-time high from placing second in the Targa Tasmania tarmac rally race in early May, Samantha Winter (Care Connect General Manager – Finance & Info Systems) shares her love for rally racing with us.

As navigator to her driving partner Peter, Samantha is responsible for delivering clear, split-second, precise and directional data whilst driving at speeds of up to 200kmph under all 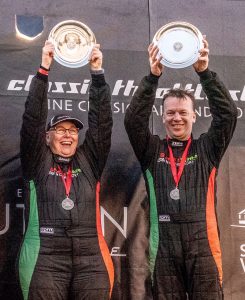 From a young age, Samantha knew one of her great loves would be cars, reminiscing of her driving in the Adelaide Hills and dirt rallying in her 20’s. This then led to her meeting her driving partner, Peter Gluskie, and four years later, they have created a strong team that is built on mutual confidence and trust.

‘He’s my best friend,’ she tells us with a smile, and it is easy to see the camaraderie between driving partners, though Samantha has admitted that she and Peter do have their arguments. But through good and bad days, friendship triumphs over disagreements and Samantha and Peter get to share their love for rally driving.

In addition to the friendship that comes from a shared love of cars, Samantha explains how rally car racing affects her emotionally and mentally. ‘[Rally car racing] is the ultimate form of mindfulness,’ she says, adding on that it is also ‘the ultimate form of adrenaline.’ Samantha imparts how in the moment, you can’t get distracted by the zooming cars passing you by and how you have to zone out, while your heart beats 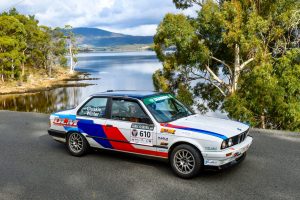 out of your chest as you drive speeds of up to 200kms on tarmac roads that are closed to the public during the race. It is this contradictive and strange combination of being so involved in the moment and heightened response that helped Samantha deal with winding and sometimes slippery roads, while at the same time, giving out precise and detailed instructions to Peter in her role as navigator. But it does have its rewards. ‘It’s a privilege to drive on spectacular scenery,’ she says as she tells us the sights that she’s seen: the crystal waters of the Great Barrier Reef, the high country plains of Mount Buller and the sloping Adelaide Hills.

There have also been competitors who have been to all 28 Targa Tasmania events, with some of the oldest competitors being in their 80’s. That’s a lot of fast kilometres under the hood! Whether it’s the adrenaline rush, the camaraderie, the scenery, or the next win, we can tell from the sparkle in Samantha’s eyes that she has no intention of slowing down anytime soon. Even a race incident on her first Targa Tasmania, which left her with three broken ribs in her back, won’t slow her down.

Congratulations to Samantha and Peter for their amazing achievement and we’ll keep you updated of her future races and wins.

If you want to take a back seat with Samantha and Peter on their rally car racing journey, follow their page on Facebook at gluskiewinter_motorsport.