From Residential Care to Home Care with a Home Care Package

The saying “Live your life to the fullest” is the perfect way of describing what Frank Mills has achieved since his birth in 1928.

Born just before the Great Recession of 1929 and growing up during WWII, Frank’s experiences on the family farm and consequent enrolment in the Army at the age of 17 led to a working life in land management, Fire Chief within the Byron Shire on the Northern NSW Coast and cultural historian. His interest in story telling was fuelled early in life listening to stories being told on the wireless and by his mother, who was a natural story teller. He has fond memories of gathering around the kitchen table with his three brothers and a roaring fire for this nightly entertainment.

Story telling is the art form of the ages for passing on the richness of family experiences and history, and in this case, fuelled Frank’s life long pursuit for knowledge. His mother gave him his first book on Aborigines when he was 12, and from there his enquiring mind took him near and far to explore local history, as well as many other cultural histories. Among his many achievements as Fire Chief, Historian, Author, Land Management Consultant, Councillor, Volunteer and Speaker, Frank has always pursued a keen thirst for learning and is the local custodian of history and culture of Brunswick Heads where he has lived throughout his life. His efforts have been recognised with multiple local, regional and national awards, culminating in a Medal of the Order of Australia (OAM) for his contribution to fire prevention. 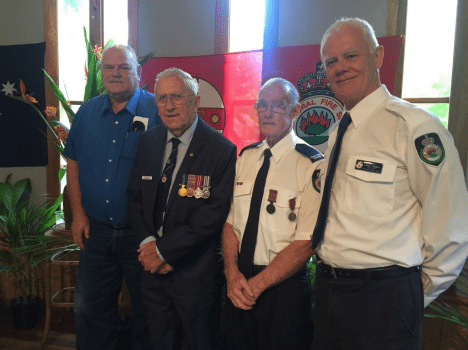 Several years ago, Frank was admitted to residential care during a difficult period, but soon realised that his quality of life was not the same without his books, research material and the quietness of home to further his work and interests. He says, “A person like me who still has ability to work and write is far better in my own home.” Within four months of being admitted, he was healthy enough to leave residential care, and at the age of 87, return to the comforts of his private space. “Books are my life,” says Frank. “I’ve travelled around the world many times but I’m never too old to stop learning.” He still prepares Power Point presentations on request and is a willing story teller whenever the opportunity arises.

He continues his life’s passion at home with the help of additional services managed by Care Connect. “I can be master of my own domain with the help of Care Connect personnel. They have been very helpful to ensure I can pursue my writing, have a computer and keep my other interests. I’ve never had any problems which they couldn’t solve.“ Frank has no intention of slowing down any time soon. He is as keen as ever to keep volunteering, keep learning, and keep telling stories. He says quite adamantly, “Whatever your interests are, continue with them into your old age.”