Bringing the music back into Jeff’s life

Broken Hill native Jeff has always had a passion for music, but it wasn’t until his late twenties that he decided to pick up a guitar and, as he says, “give it a fair go.” 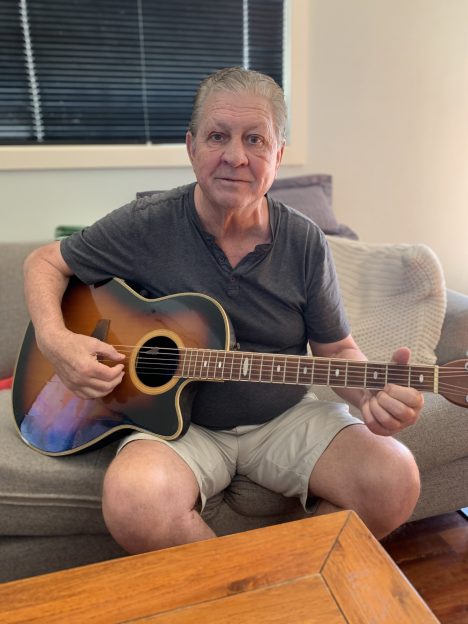 “I’m mainly self-taught, so it took me a few years to get to the point where I was able to confidently play songs.” Jeff would pick up tips from friends and then he would spend hours upon hours practising and perfecting what he had learned. With perseverance, Jeff found himself writing his own songs in the styles of some of his favourite artists including Slim Dusty, Johnny Cash and Alan Jackson.

Father of two, Jeff moved to Sydney two years ago after his daughter fell ill, so he could help to look after his two young grand-daughters while she recovered. He had left everything behind in Broken Hill, but had arranged for his things to be packed up ready to transport. Unfortunately, the distance made the cost to send his belongings prohibitive and so, amongst other things, Jeff was left without his trusted guitar.

When chatting with his Care Connect Client Adviser Karen recently, Jeff told her how he was missing music in his life, “it makes me a happy person, and others get a kick out of it too.” Karen knew she had to take action. She reached out to a few musical friends, but no-one seemed to have a suitable guitar to lend or donate. So, she decided to email a talkback radio station and they very kindly put out a call to their audience for anyone who had a spare guitar they weren’t using.

The generosity of the public astounded Karen. Within 20 minutes there were many offers of guitars, one from a gentleman named Richard, who lived just around the corner from Karen’s home. Richard donated his guitar and Karen picked it up and took it to Jeff.

Jeff was ecstatic to have a guitar in his hands again. It made him feel alive. Karen got a treat too as Jeff enthusiastically played some of his favourite songs for her, including Alan Jackson’s ‘Little Bitty.’

How have you been keeping connected during COVID-19? We’d like to share more about what you love doing at home. You can send your photo and details to marketing@careconnect.org.au.